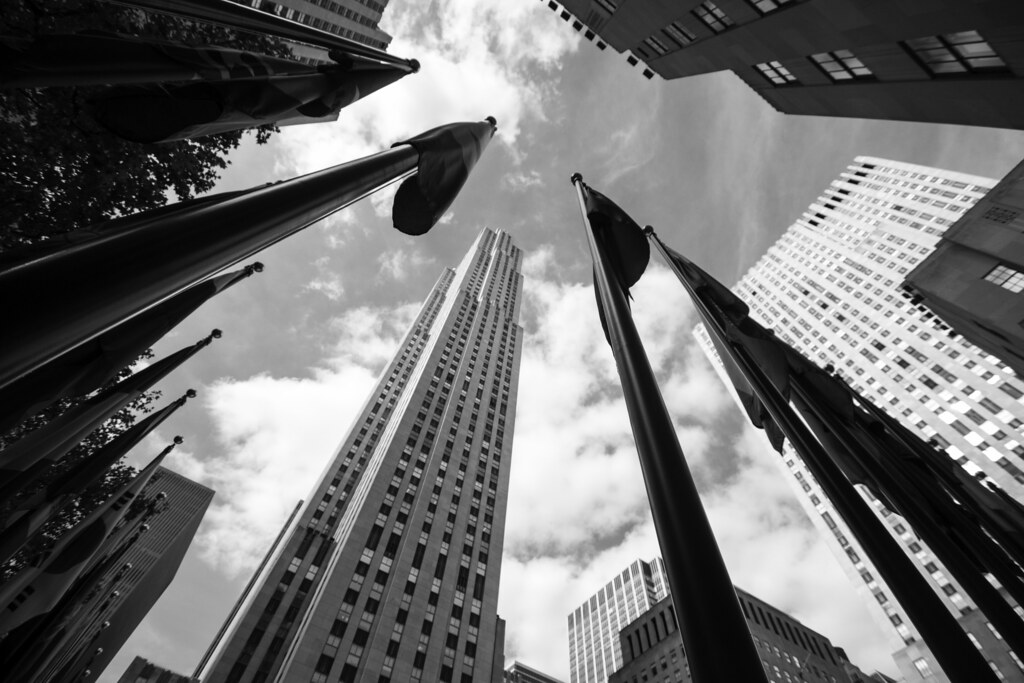 Ok, ok, ok...I've been a truly bad blogger...I just cant' seem to get up the enthusiasm to blog lately...but I started this post months ago (literally) and finally decided to get on with it!

So, today we take a step back in time to last fall when I went to NYC for a week, and which I posted about previously here, here & here. Today post, however, is about one of my absolute favorite places in the city, Rockefeller Center, which most people are well acquainted with, from the Today Show, 30 Rock, and, most notably, the famous Rockefeller Christmas Tree. 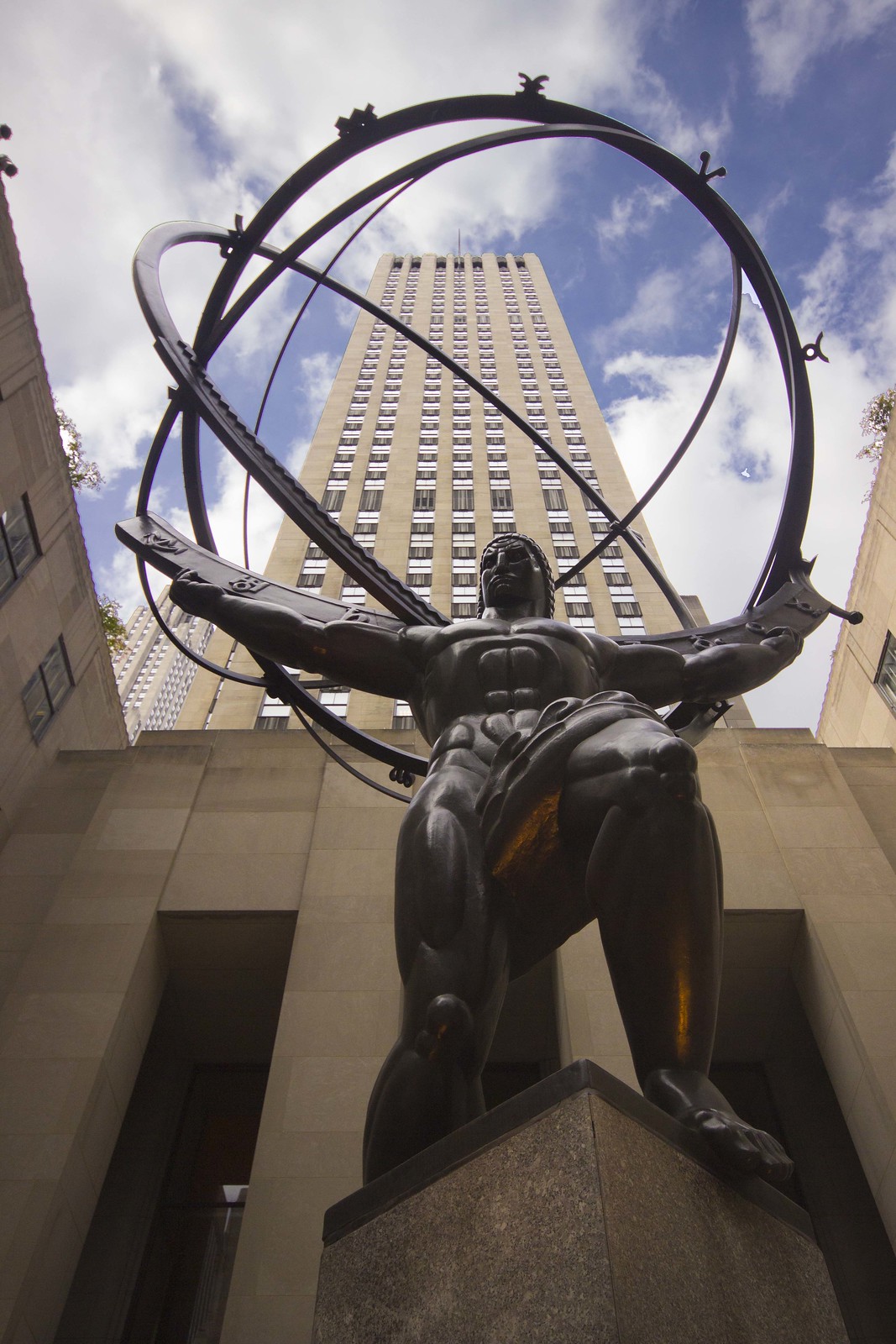 Here we have the well-known sculpture of Atlas, bearing the world on his shoulders, as we approach the main entry. 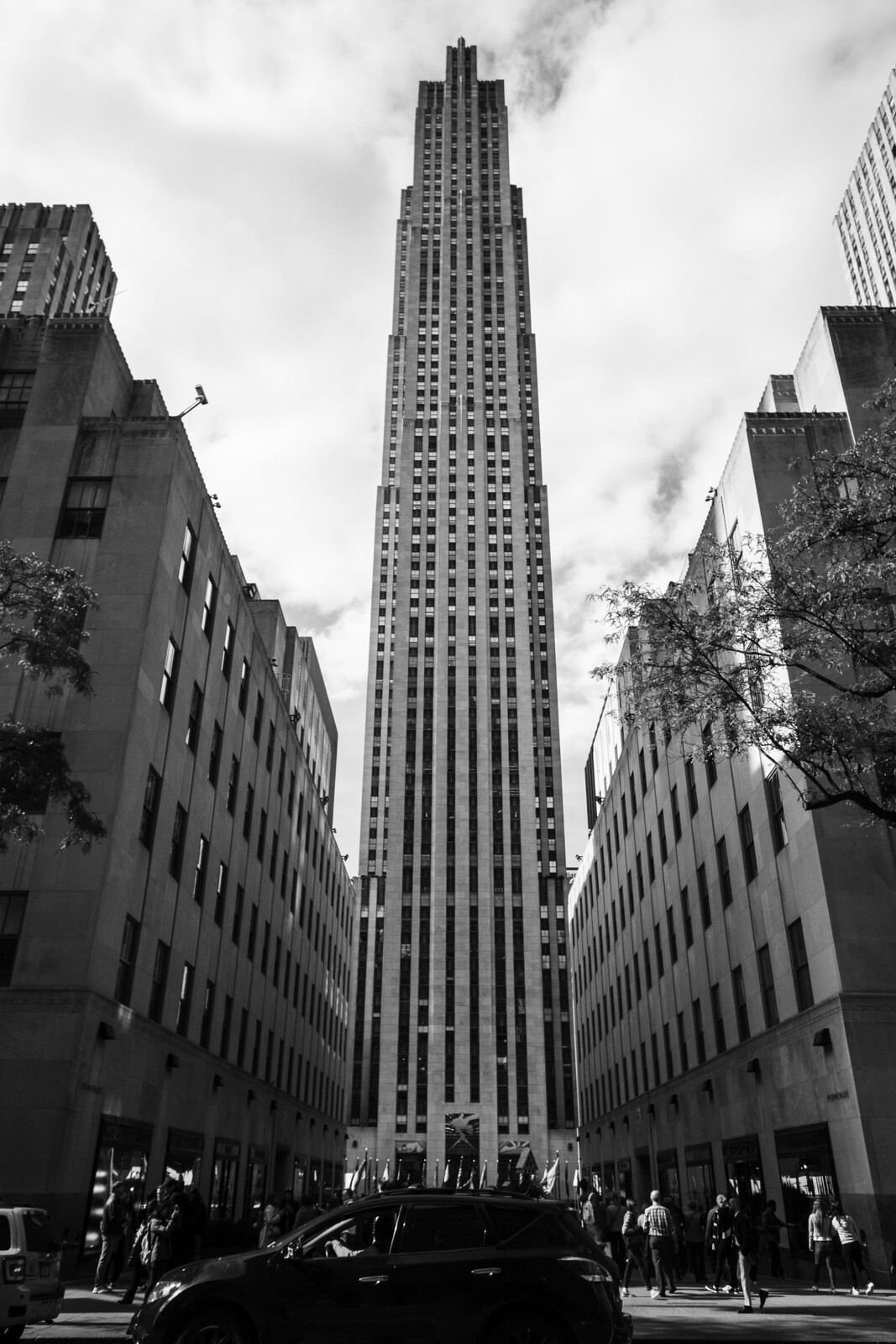 Rockefeller Center is not just one building, it it a cluster of buildings and plazas that were intended to be a "city within a city". Completed in the early '30's, the complex, like so many great NYC buildings, is Art Deco in design...and, I'll admit, I LOVE Art Deco! Very few architectural styles combine both boldness and elegance like Deco does. 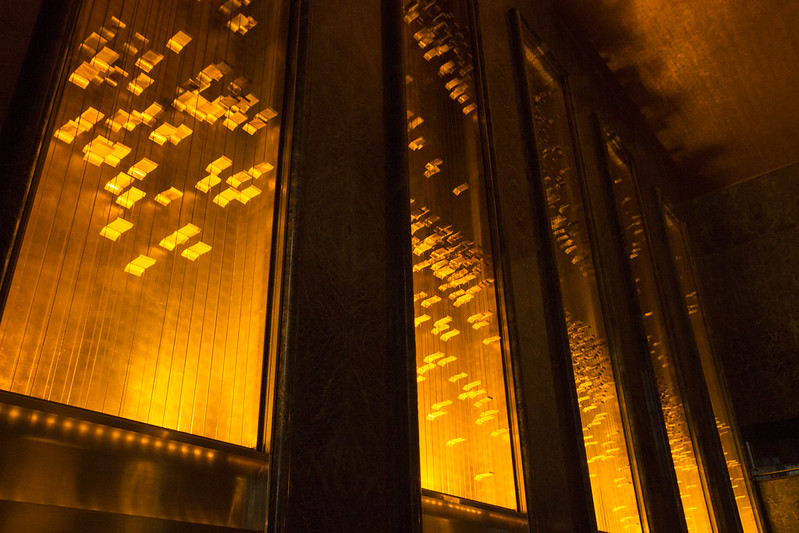 One of the hallmarks of 30 Rock is the amazing amount of artwork, from many different artists and eras. This piece, titled 'Light and Movement', was installed in the 70's. It's, well, kinda 70's...but I still liked it ;-) 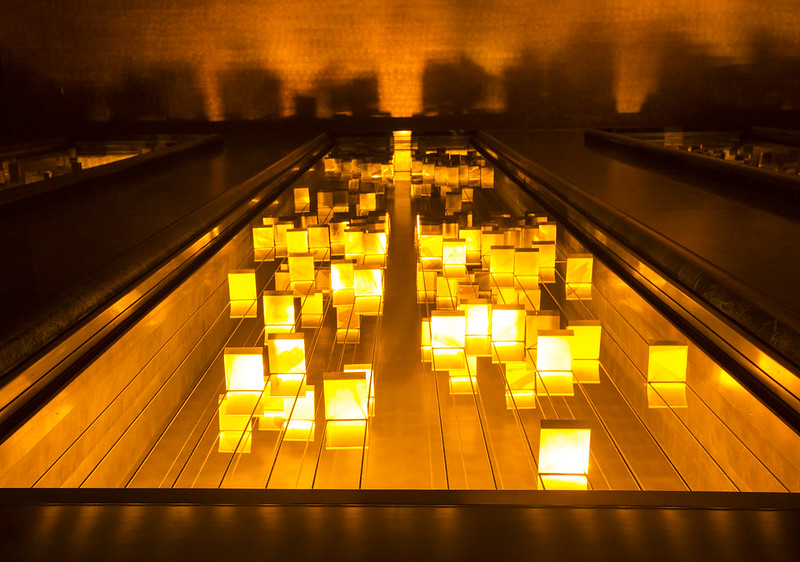 The layers of light and shadow are fascinating. 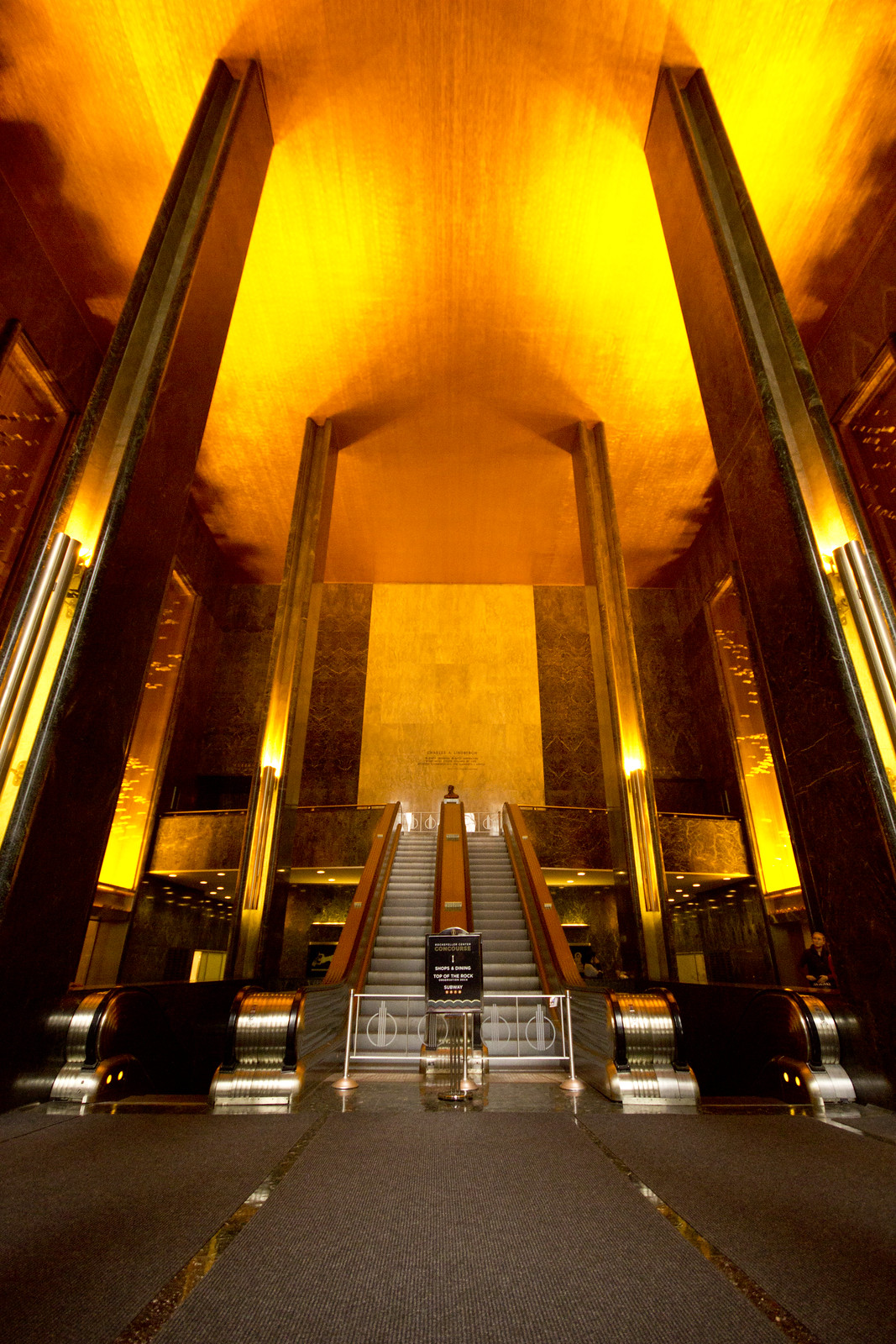 Step back and take a look at the bigger picture, however...the grand entryway. There is something so grand about these Deco entryways...sleek, elegant...and, perhaps, over-the-top. I think the fact that their relative opulence was followed by the more sterile modern/international styles makes them even more special. 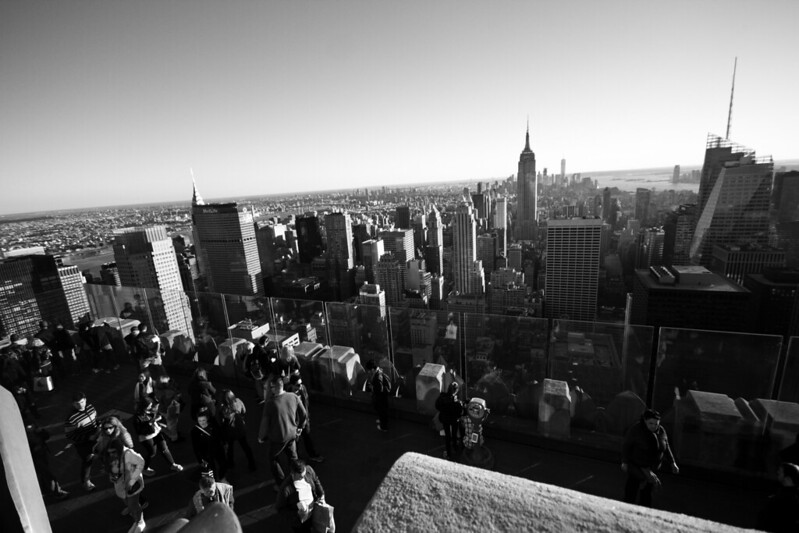 I had decided I wanted to visit the open-air viewing deck around sunset, so we had to show up in time to make it up there...be aware you'll wait in line for at least an hour...probably more, so plan accordingly! There are 3 levels of viewing decks...and they are all jam-packed! 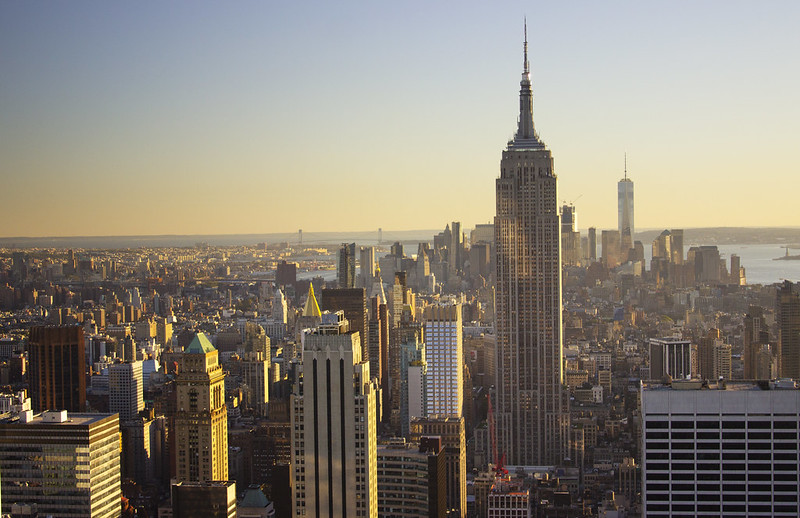 Once you make it up to the viewing decks, the whole city spreads out before you. 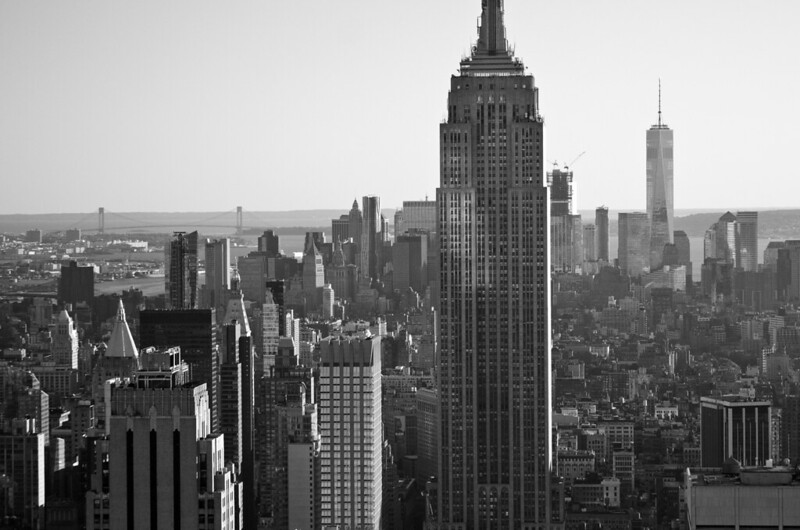 The NYC skyline is so engraved in our national consciousness, it's hard to divorce it from associations with TV and Movies. I seem to always hear strains of "West Side Story" and "Moon River" whenever I look around. 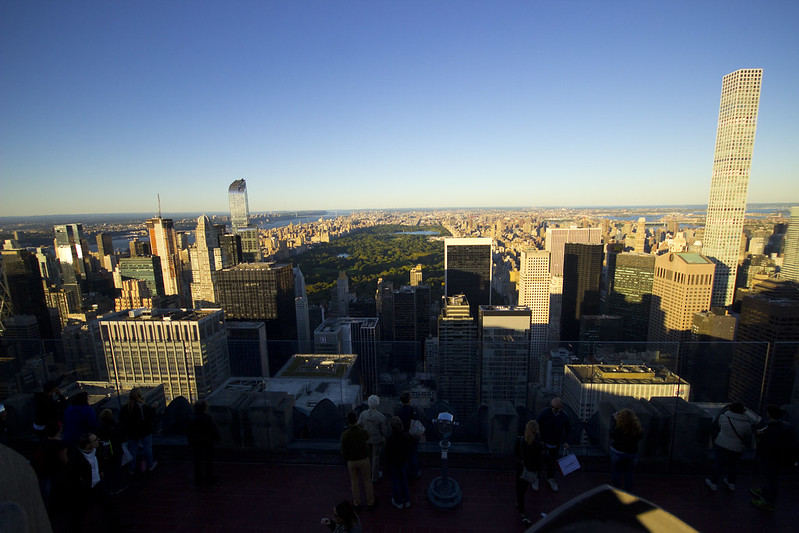 One the opposite (North) side, you get an expansive view of Central Park and the surrounding high-rise apartment towers. The one on the far right is about the skinniest skyscraper I've ever seen...and, I believe, is new since I was last in the city. 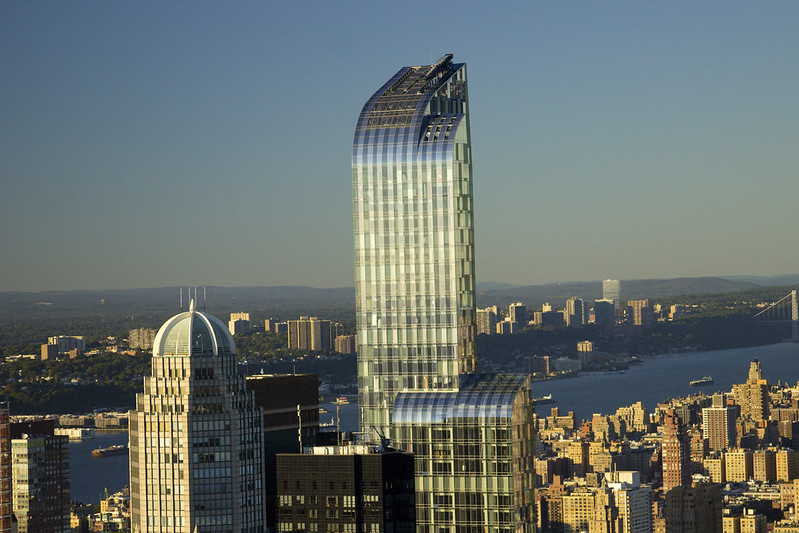 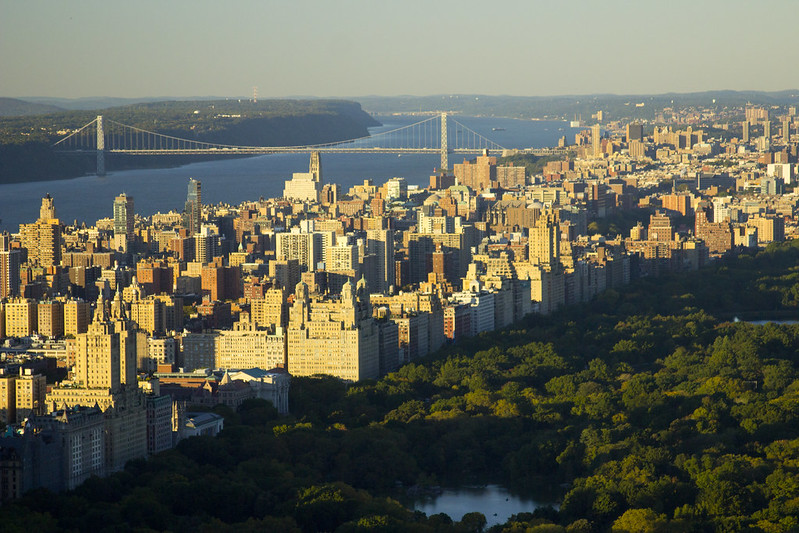 And here we have the older, more classic, NYC buildings which form the borders of the Park on all sides. 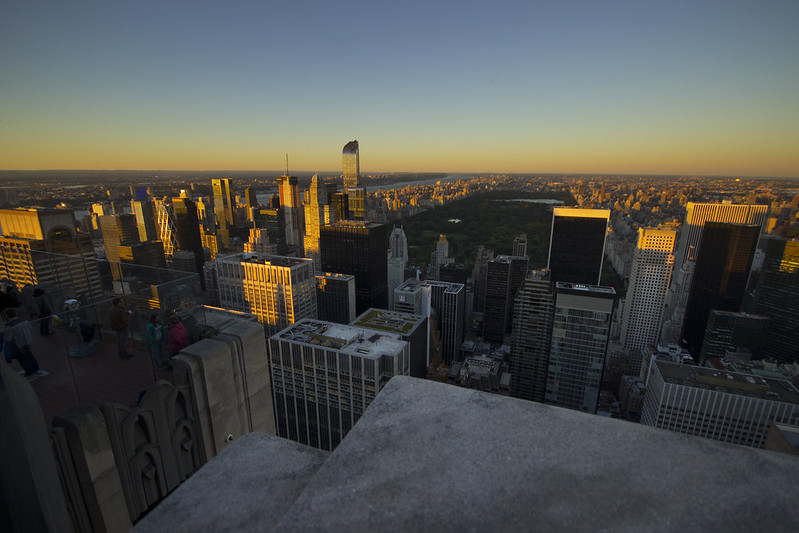 Pulling back, the wide view as the sun starts to set, washing everything in golden light. 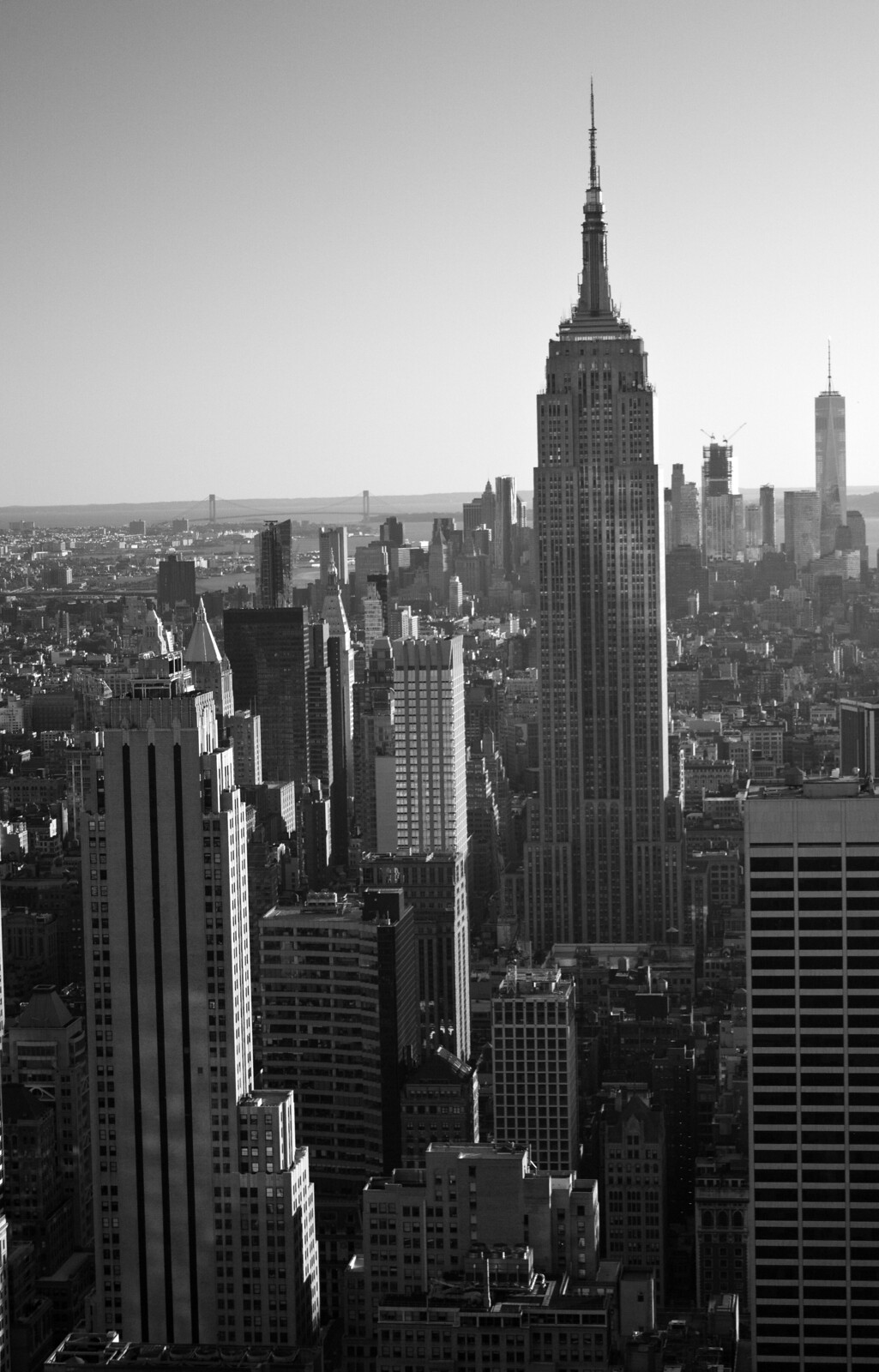 No matter where you go in NYC, it's always a thrill to spot the Empire State Building. I use it to orient myself in the city, since it stands out so grandly. 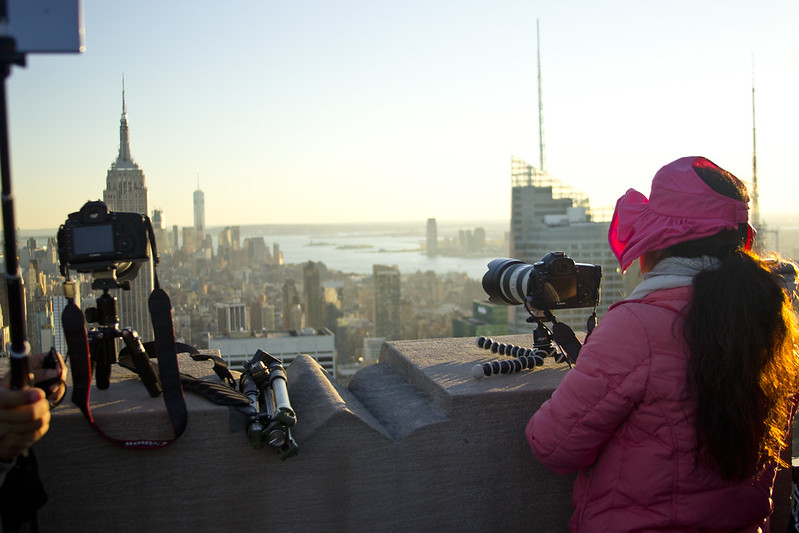 Of course, the drawback to something being a tourist attraction is...the tourists! I assumed since we were easily an hour early for sunset/dusk viewing, we'd be able to wander and get a decent spot for photos...but there were people who were already camped out when we arrived and they DID NOT MOVE at all the entire time. I sorta understand...but, c'mon...give other people a chance. 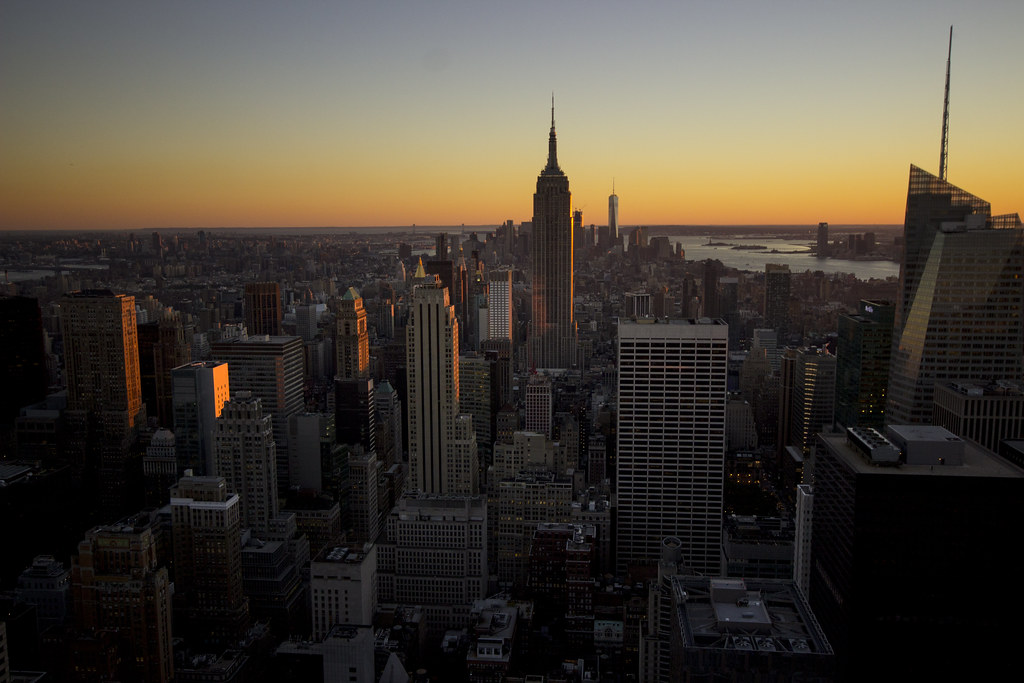 Regardless, the show is still stunning, and not even rude tourists could ruin it. As the sun slips lower in the sky, it gilds the edges of each tower in gold. 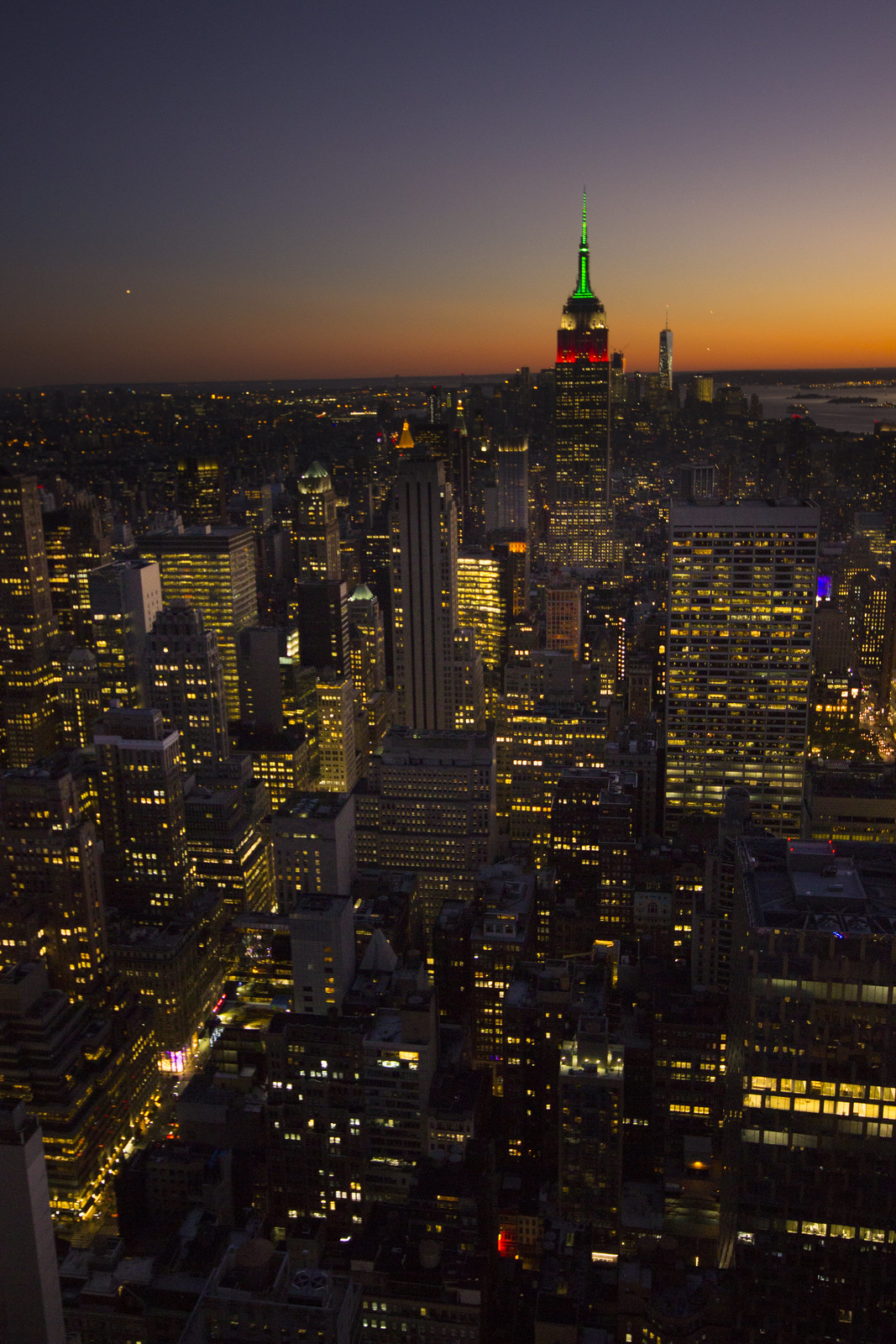 And one-by-one, as it gets darker, lights start to turn on as the blue sky deepens to a richer wash of color. 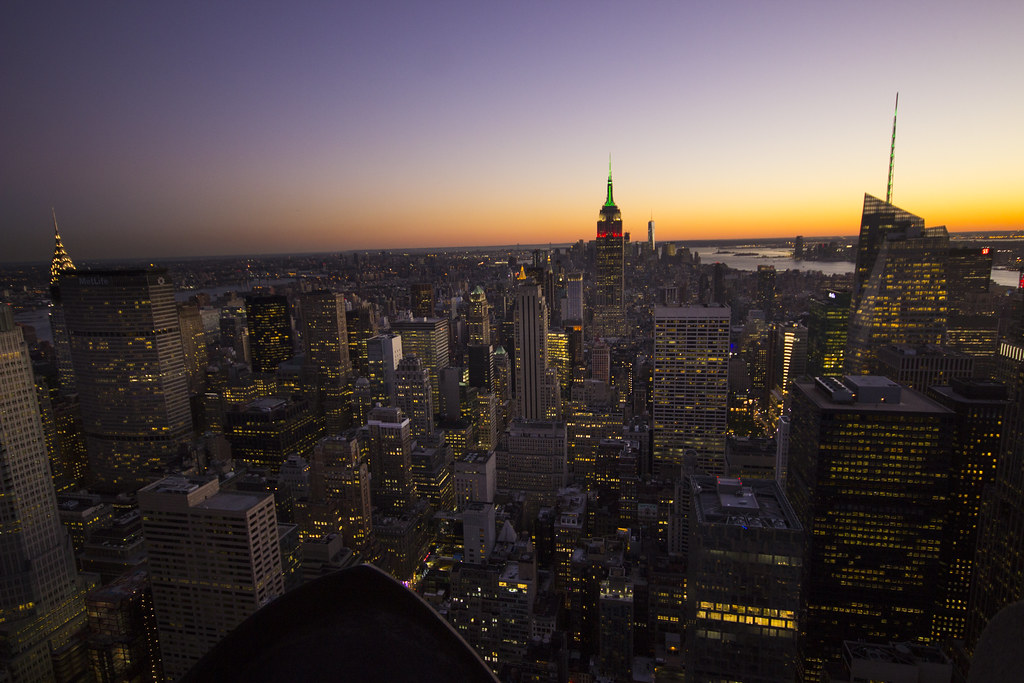 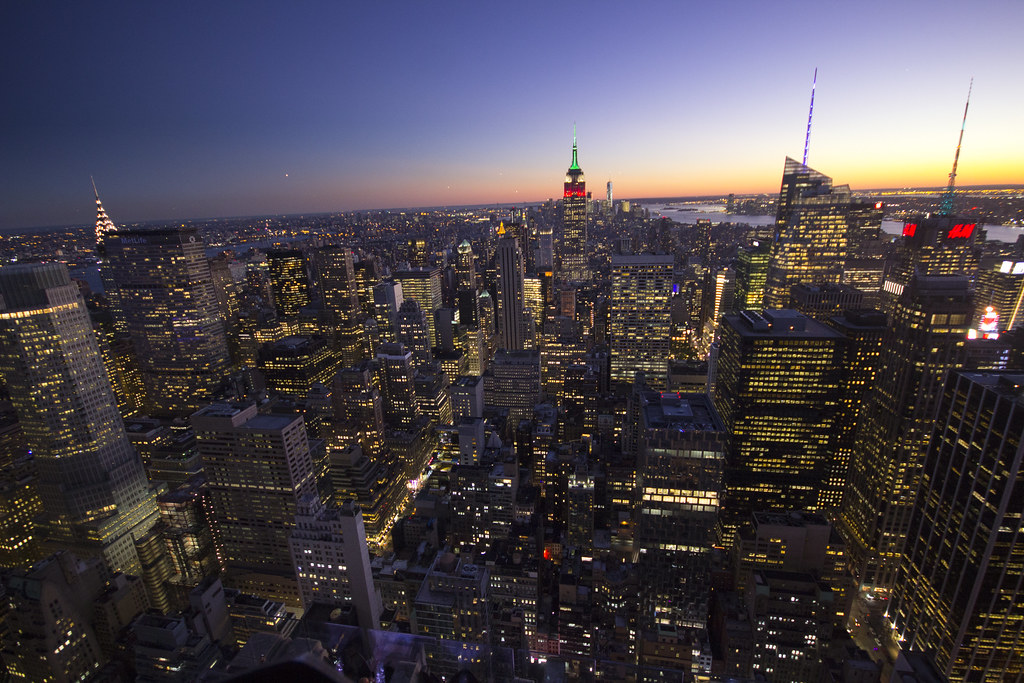 ...to cooler tones as night falls. 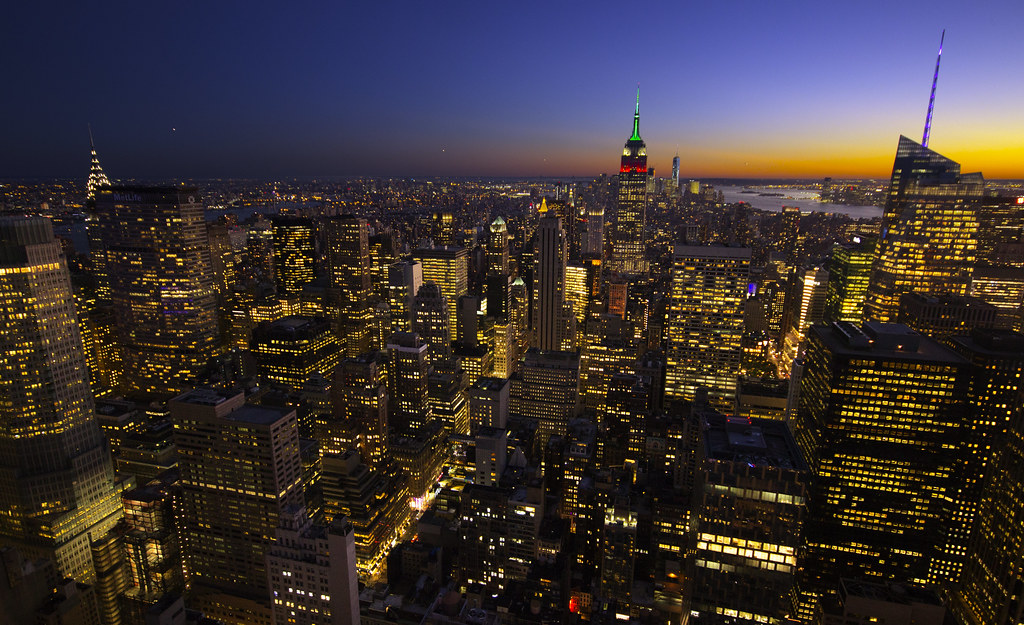 The trip to the "Top of the Rock" was a highlight of our trip, jostling crowds notwithstanding...I highly recommend it, I don't think you will be disappointed!
Posted by scottweberpdx at 7:03 AM No comments: