Yep...it's that time of year again...we're almost ready to say farewell to 2016 in anticipation of 2017. It's been a rocky year for all of us, I'd venture to guess. Without further ado, let's take a look back at the past year in my garden. I decided that to keep things simple, I'd focus on one view of the garden as the months progress. So...I give you 12 months of my front hellstrip! 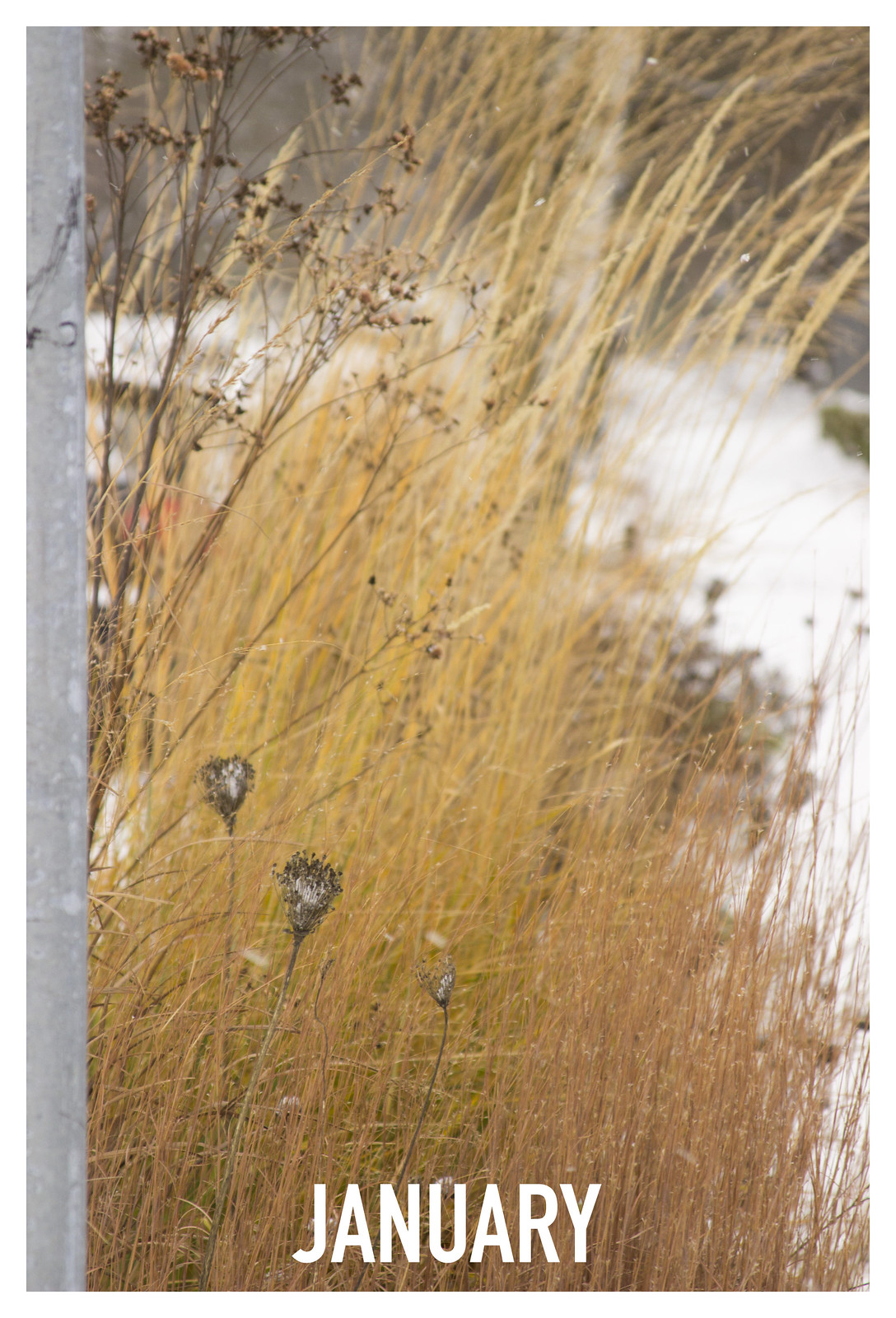 January of 2016 saw us get an actual bit of snowfall! I seem to remember staying home from work that day...which was such a treat. Snow in Portland is rare, and we can go an entire winter or two without seeing a single flake...so any measurable snowfall is a good reason to celebrate! 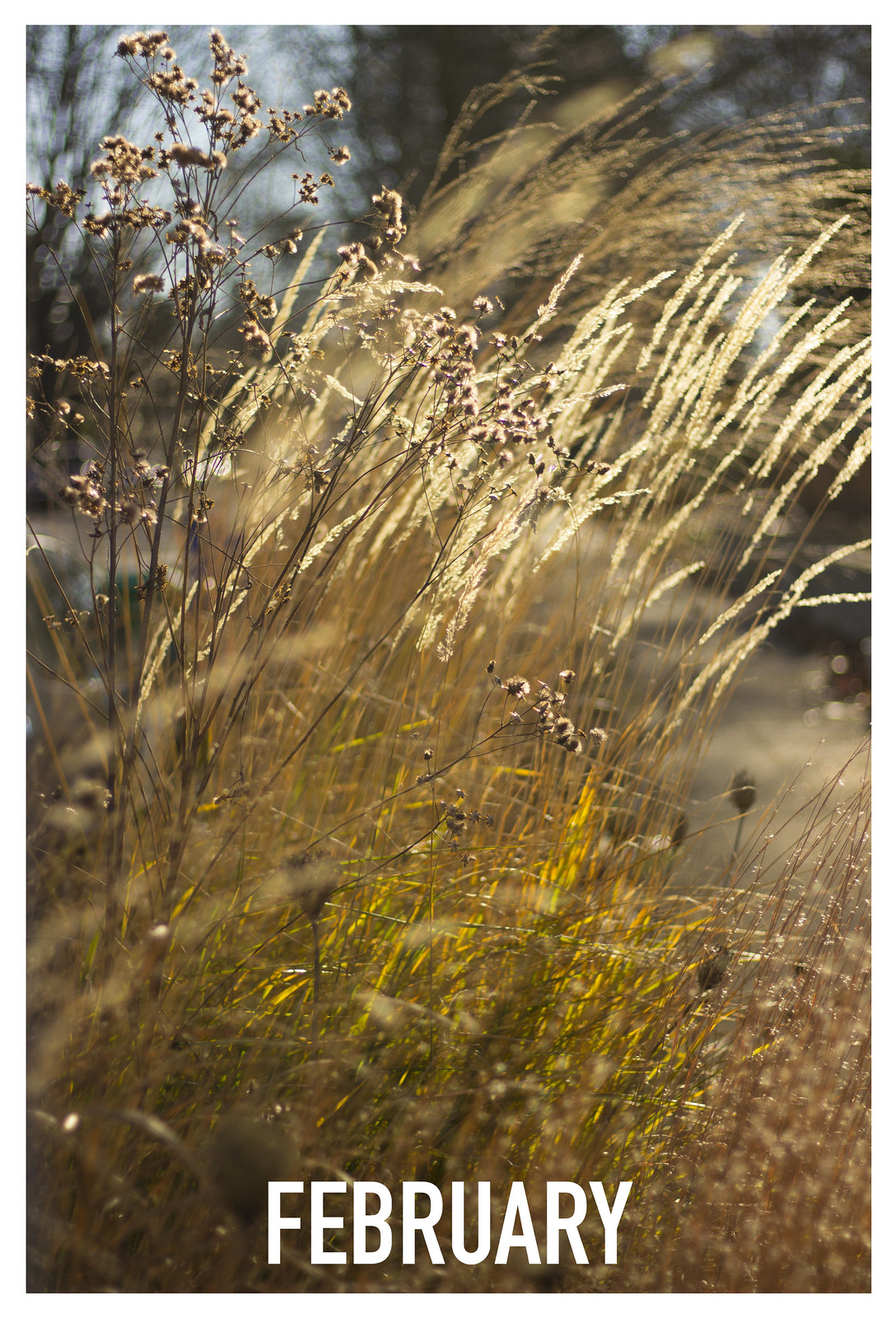 February is typically when my garden starts to really wake up for the year, and therefore, its also the month I usually start cutting things back. This pic is just before I started the annual cut-back. It's actually the saddest part of the gardening year for me...as I have to cut down all the beautiful grasses and seedheads which provide so much winter beauty. I made the decision during the winter to re-work parts of this hellstrip, replacing plants that weren't doing well and re-arranging things slightly to break up groupings of plants that looked a bit too rigid for my liking. I knew this would mean the hellstrip would look a little threadbare this year, while things settled in...but that's part of gardening, right? 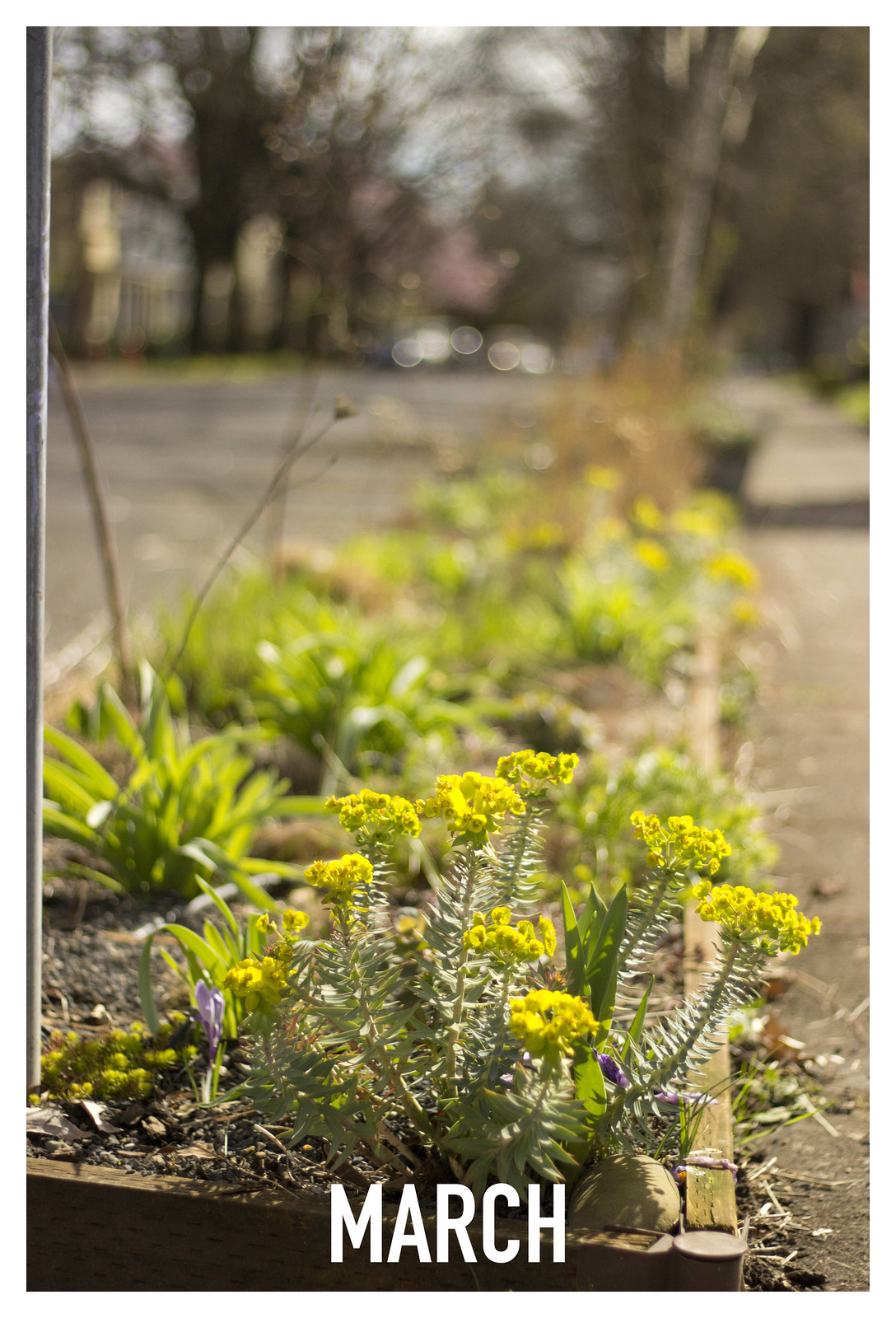 By the time March rolls around, I've forgotten my temporary sadness, luckily, in the excitement of seeing all the new, green growth. Its amazing how just a few weeks can make such a difference. Truly, its also kind of amazing to have the garden cleared and be able to see all of it in a glance, without the plants obscuring views. Of course, it's also the most dangerous time, as it seems there is so much bare space...and the urge to buy more plants to fill them in is VERY REAL. I try my best to resist, knowing that all that empty ground is an illusion and will be filled up within a few weeks. Still...I always buy a few things and then spend the rest of the season trying to decide where to put them. 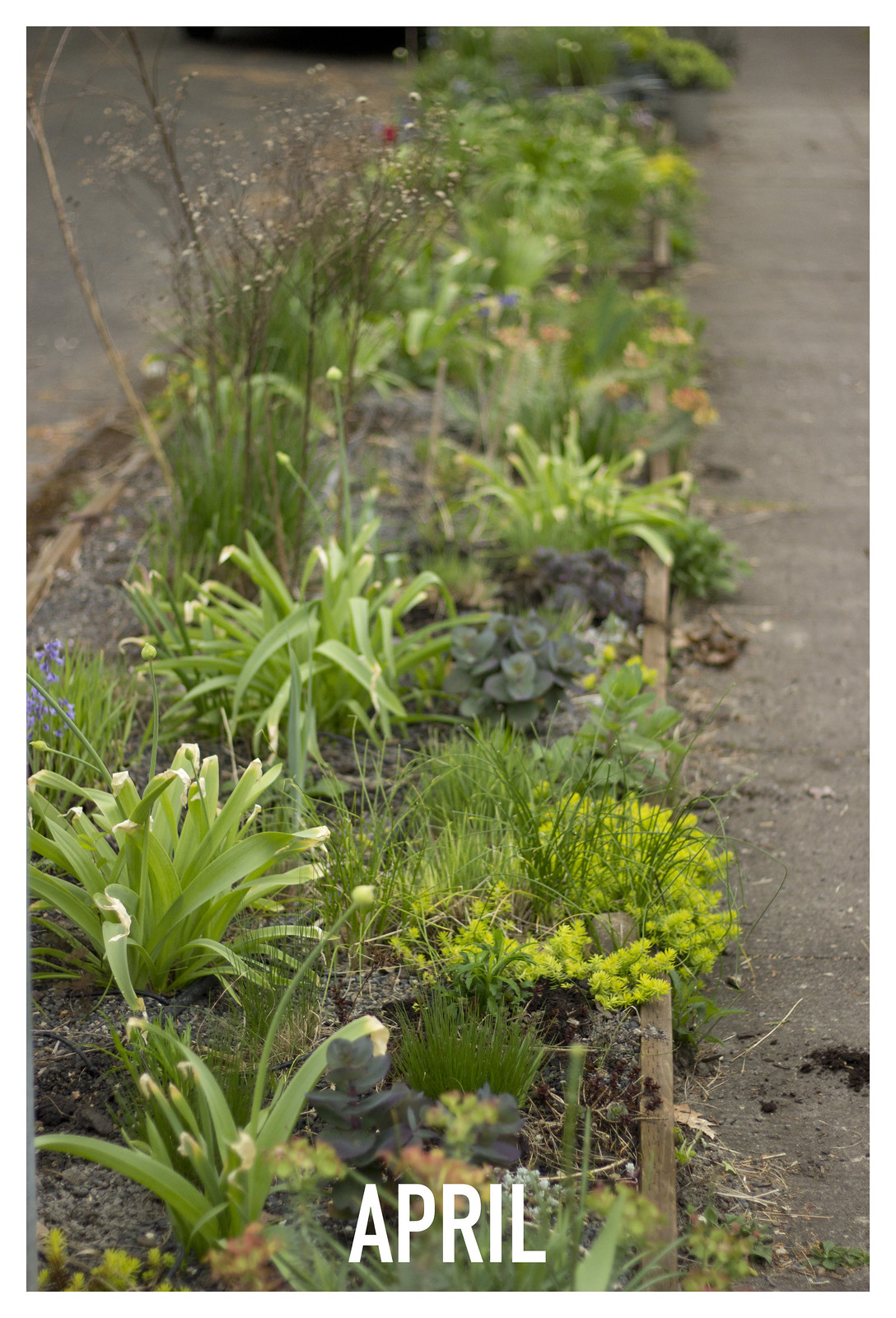 April is the last month in the garden where I can almost think of it as demure, before it explodes into growth. It's the month where I'm grateful for the bulbs I've planted...and yet I swear I should have planted MORE! I don't have too many Daffodils or Tulips, since I prefer Alliums and Iris, as they are more reliably perennials and their foliage either withers away quickly, or remains looking good for the rest of the season. 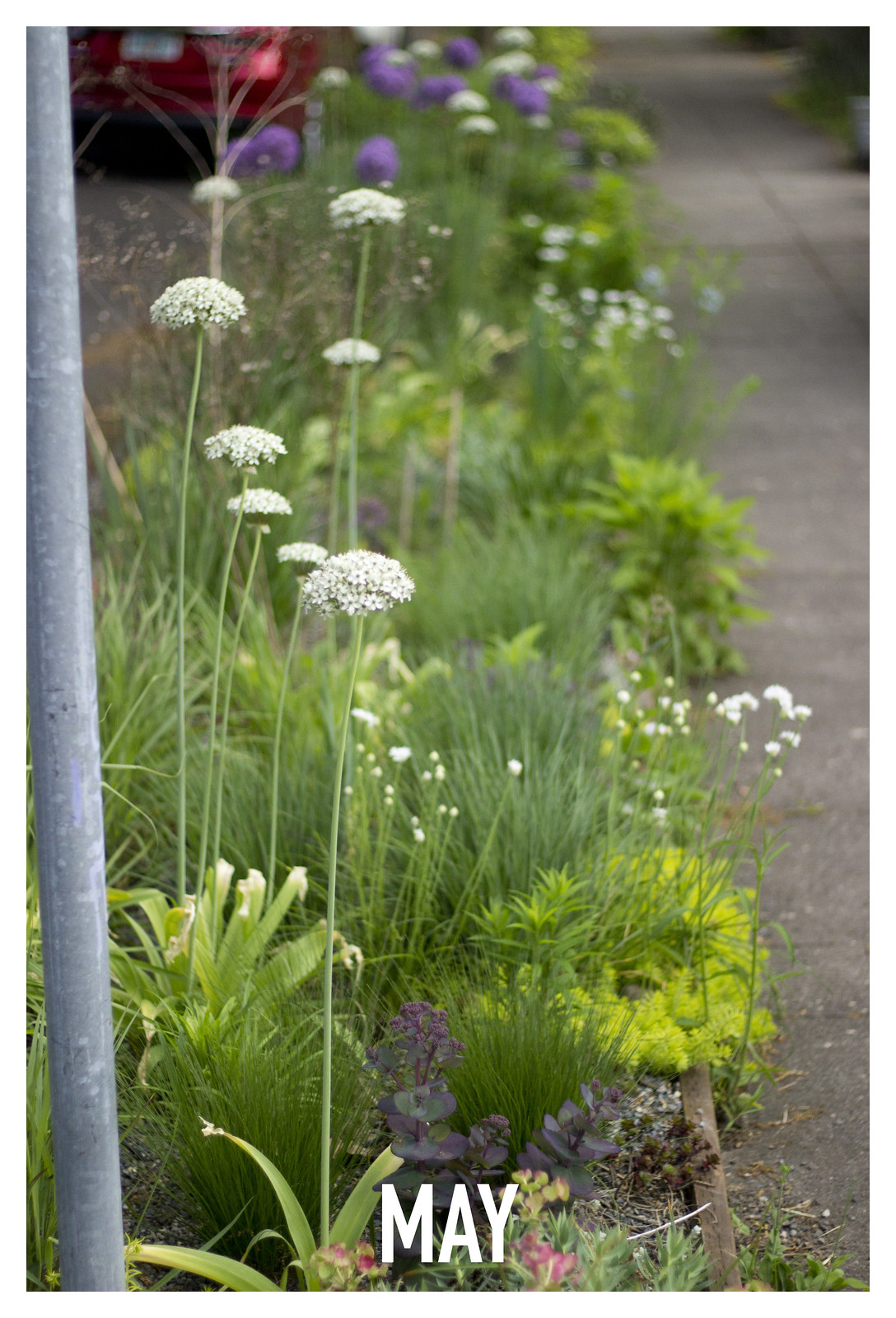 May sees the garden erupt with growth...those bare areas are rapidly disappearing...and the bulbs are dominating the garden. I think of this as one of several waves of colorful displays in my garden, which are broken up by periods where calmer, foliar greens prevail. Over the past few years, I've really come to appreciate this white Allium shown above, Allium nigrum...which is not only reliable perennials, but multiplies well...creating ever-better displays. The seedheads are also persistent...a real bonus. 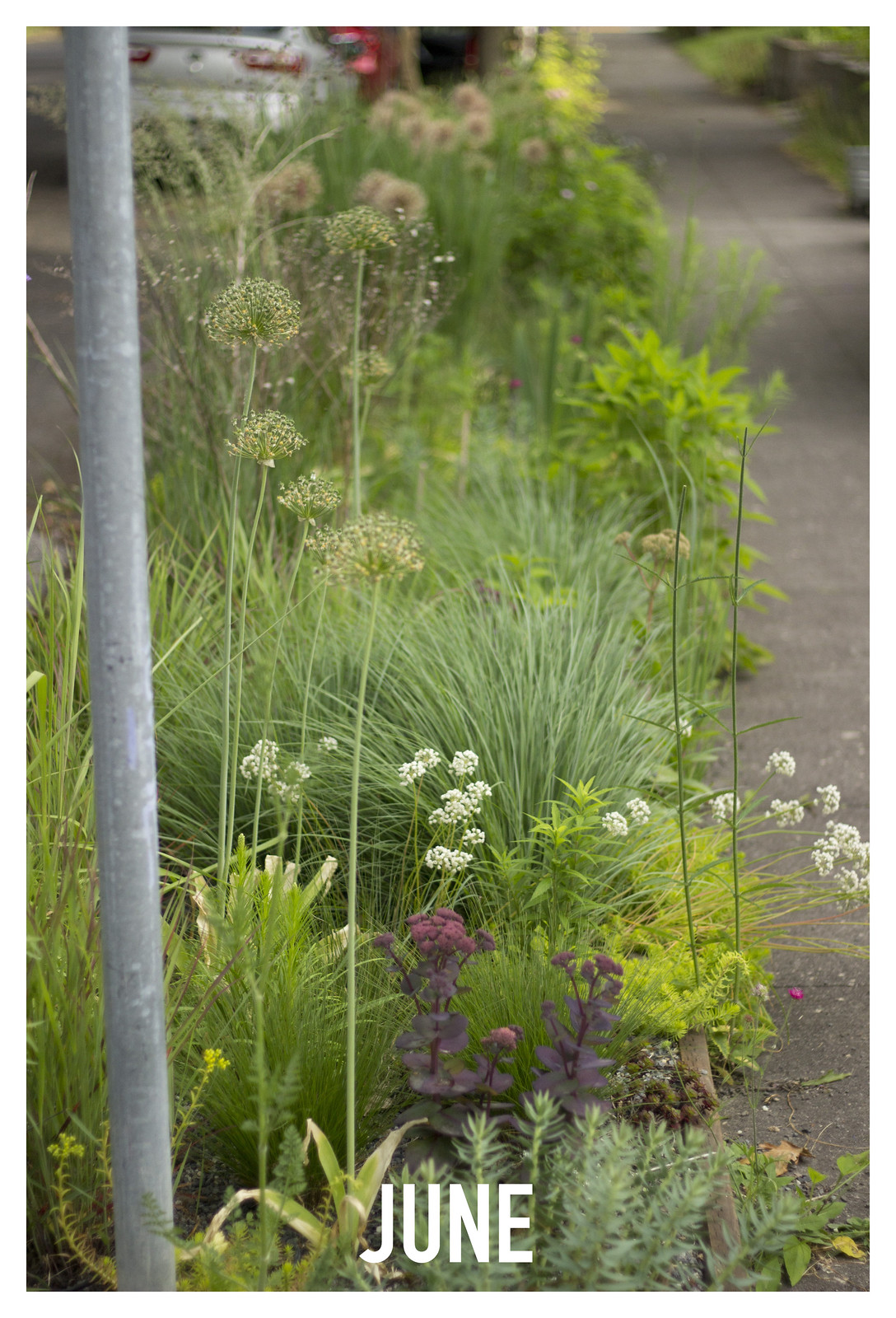 June is one of the calmer (relatively) periods in the garden, bracketed by colorful May and July, with their abundance of vibrant blooms. This is when I can really appreciate the subtle variations of greens...rich, emerald greens...glaucous gray-greens, and vibrant yellow-chartreuse greens. In this parking strip, I planted several Schizachyrium 'Blue Heaven' in the first year...because I love their steely blue color. However, to make sure they don't get lost, I've purposely tried NOT to plant other silvery-leaved grasses with them...so they always stand out among the varying shades of green. 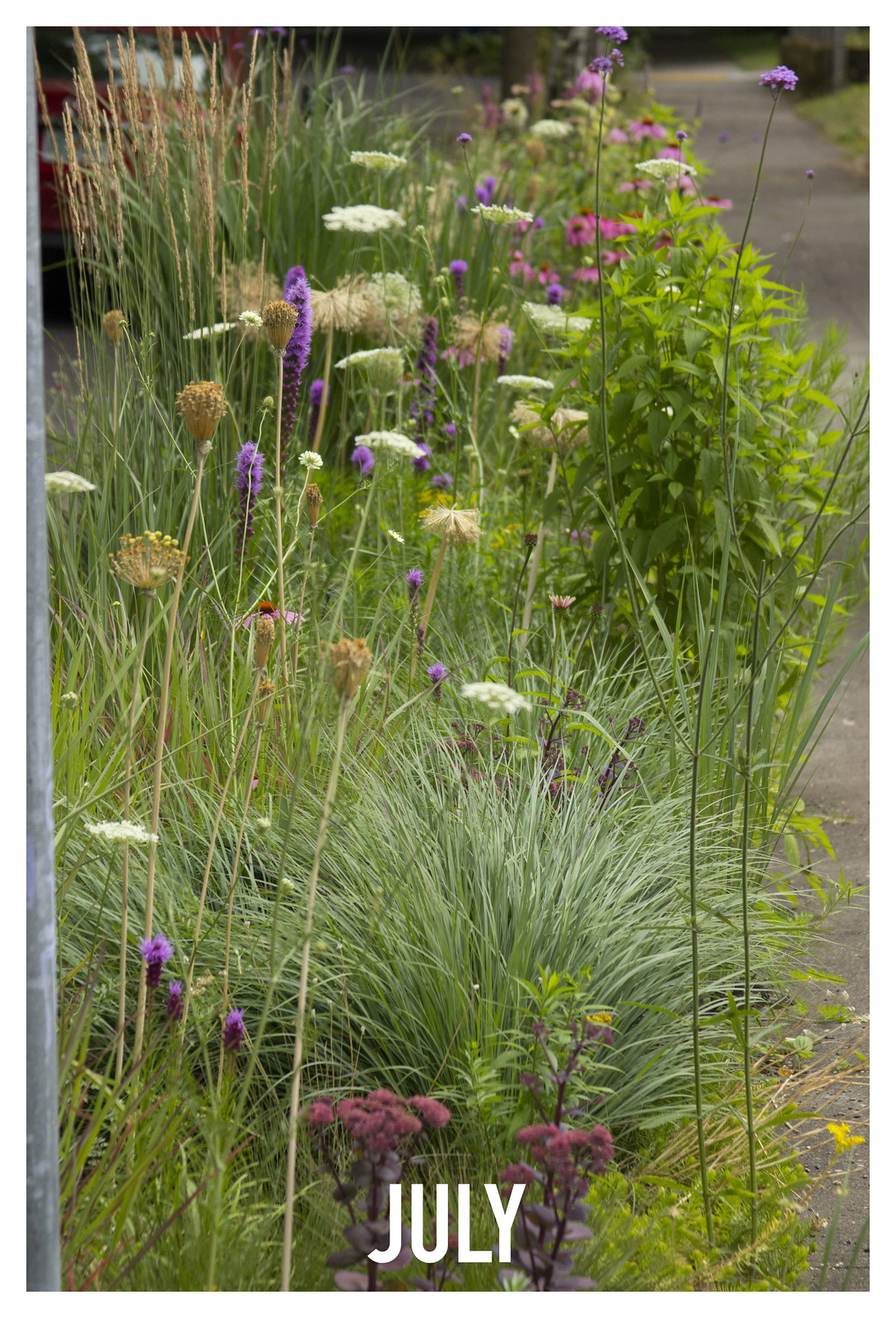 Once July hits, though, the blooms start to steal the show again. I've struggled to keep plants going in my garden...but the Echinacea have been good, dependable performers...and they are the herald of summer for me. This year, I decided early on to replace the failing Agastache with Liatris, which seemed to do well...and I'm hopeful they will thrive in the heavy soil. I also added more Daucus this spring...hopefully they will reseed and multiply...fingers crossed! I was fairly happy with this mix, to be honest...the mix of colors and shapes was spot-on for me. 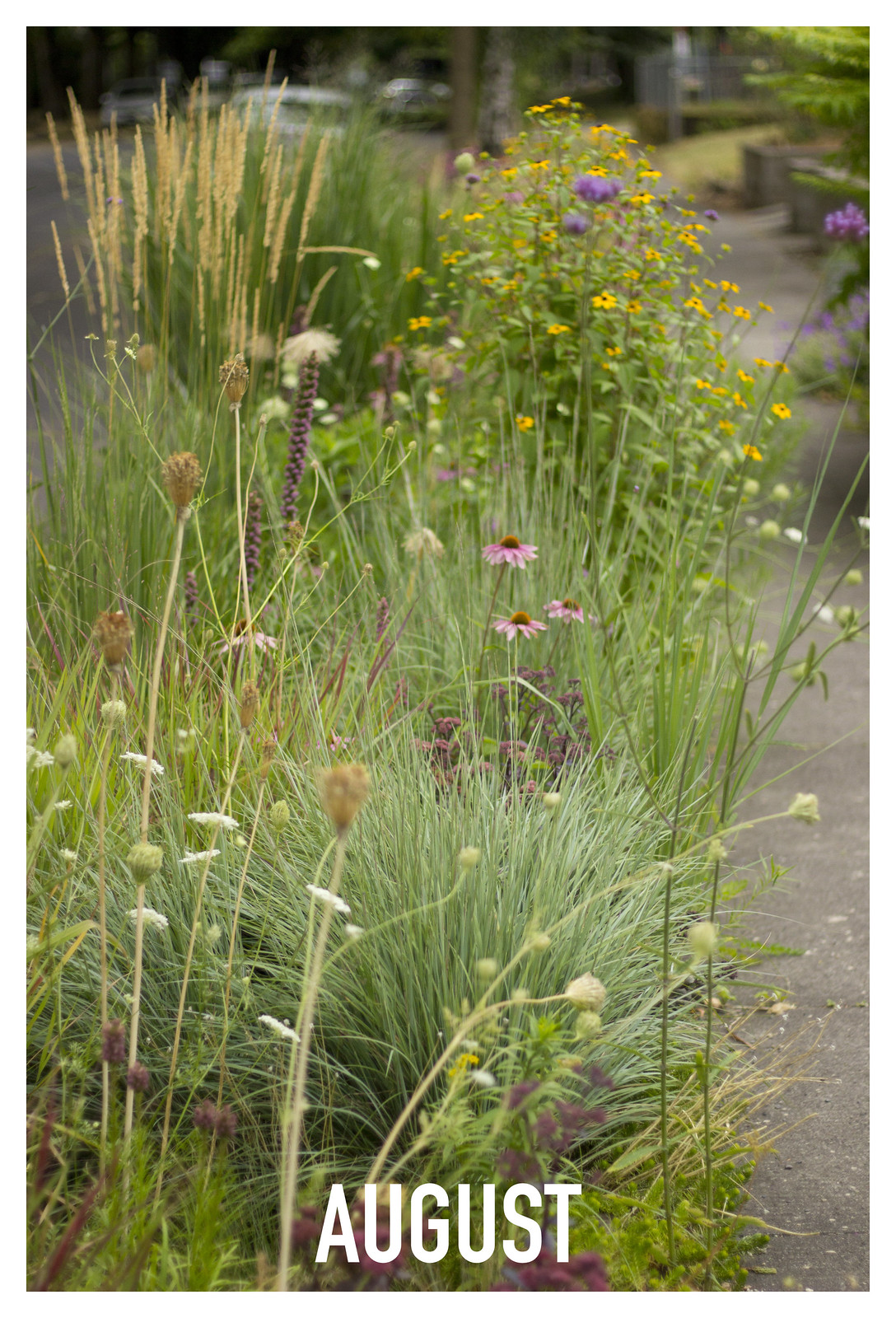 August continues much as July did...still very floriferous, but, perhaps, more somber as the days turn hotter. I feel like it was quite a warm summer...but, honestly...anything over 75 is too warm for me and I retreat inside to the a/c. Luckily, mornings and evenings are generally pleasant...and I stroll around the garden daily. I always find this time of year in the garden particularly satisfying...it practically heaves with life...and yet, there is that particular feeling that the wave is cresting...and the downward slide is just around the corner. 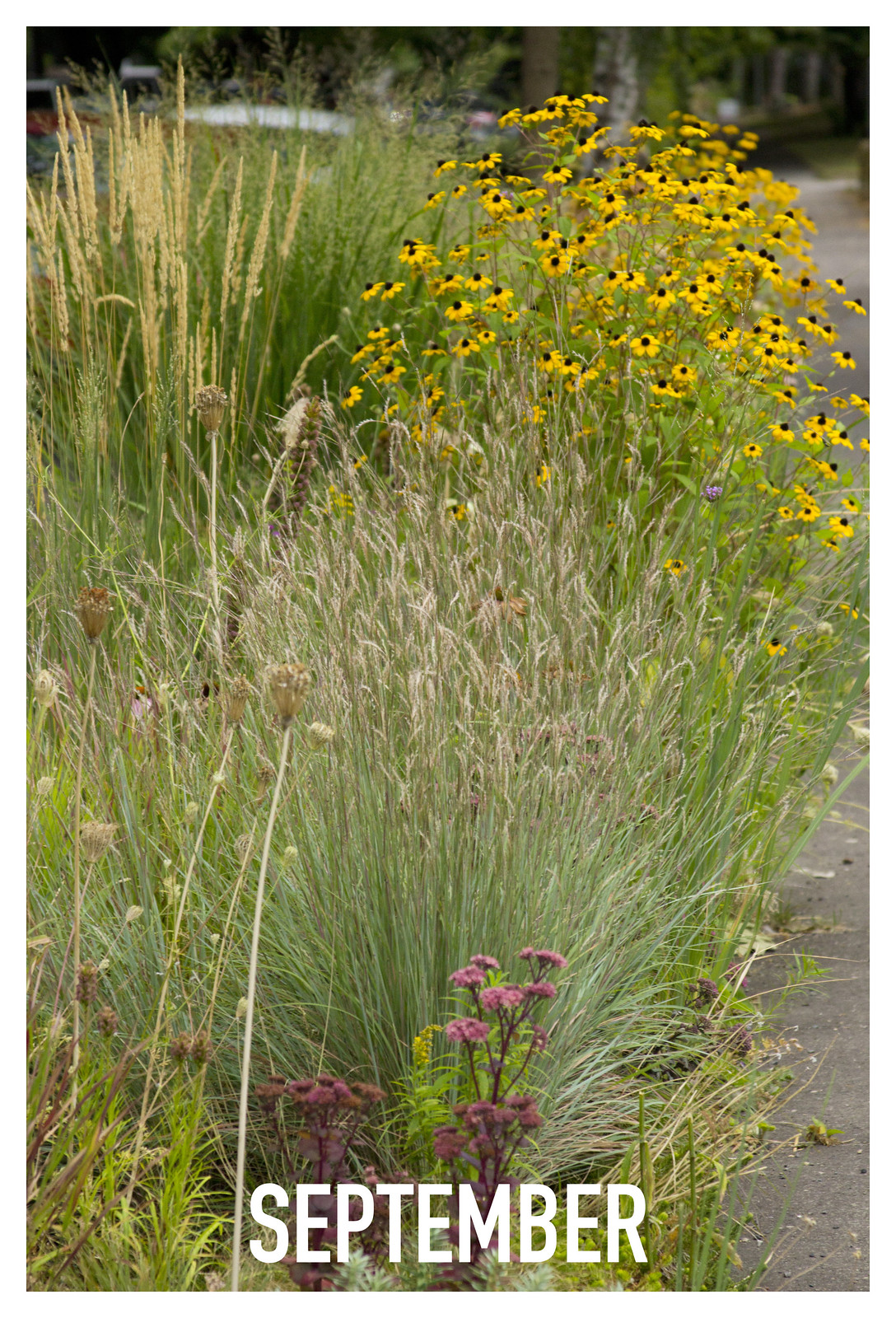 September is a finicky month here in Portland...a mix of hot days with the occasional cooler, rainy day thrown in to remind us of our coming autumn. There is a sweetness to those last, warm days now that their end is in sight. The grasses, which have played supporting and structural roles until now, start to assert themselves more each day...blooming and flushing with fiery, autumnal colors. I am unfailingly tactile...and I cannot walk past the grasses without running my hands through them. The knobbly blooms of the Panicums, the fuzzy eyelashes of the Schizachryium and the pliant straw-like stems of the Sorghastrum never fail to delight. 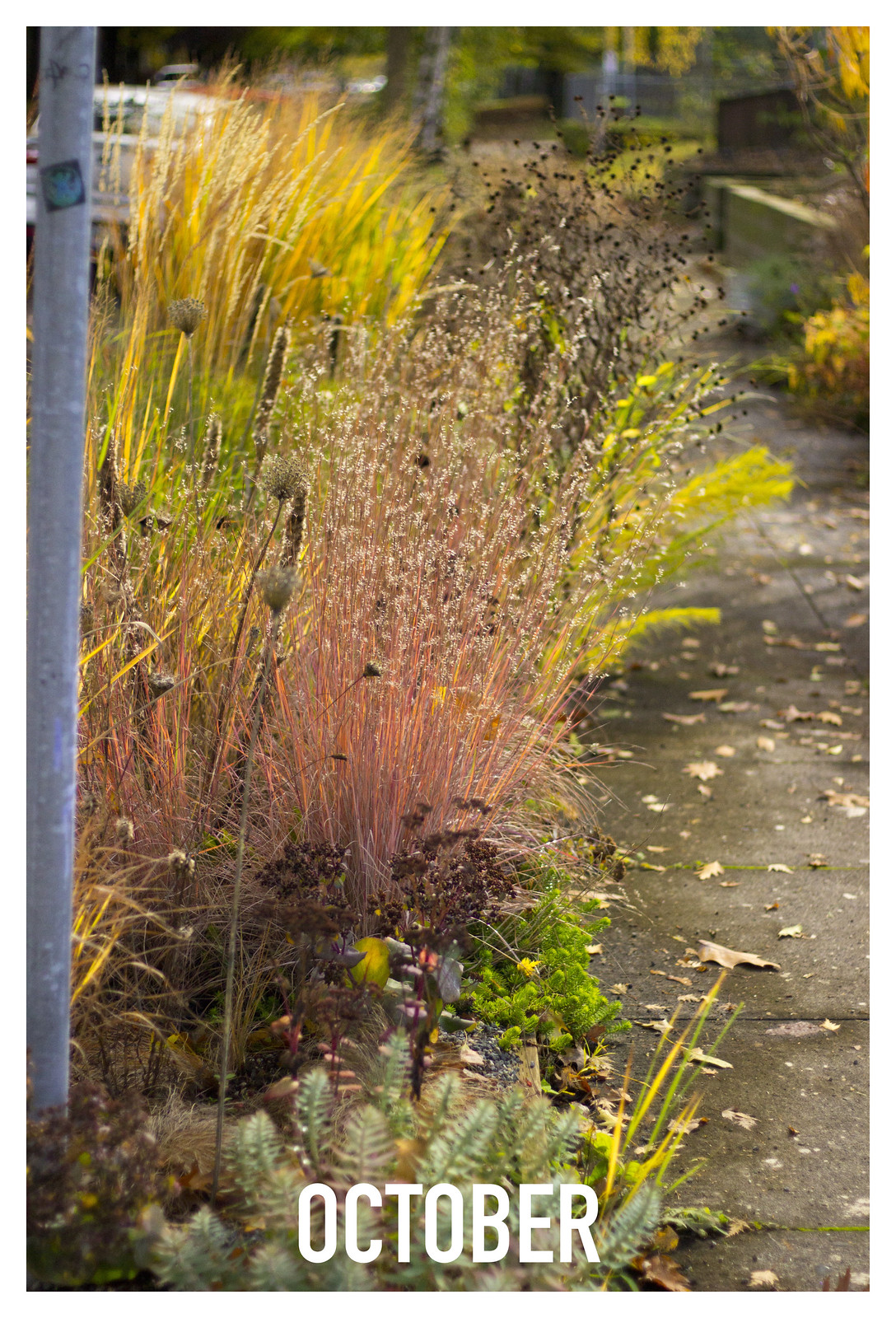 The onset of autumn is gradual in Portland, compared to other places, but it still seems as if the garden transforms overnight. Suddenly, flowers are drained of color and it's the foliage that steals the show. The light is warm but mercurial...varying from milky and soft to brash and intense. While I always take advantage of the cools temps and steady (sort of) rainfall to move things around and plant new things, I mostly take it easy. 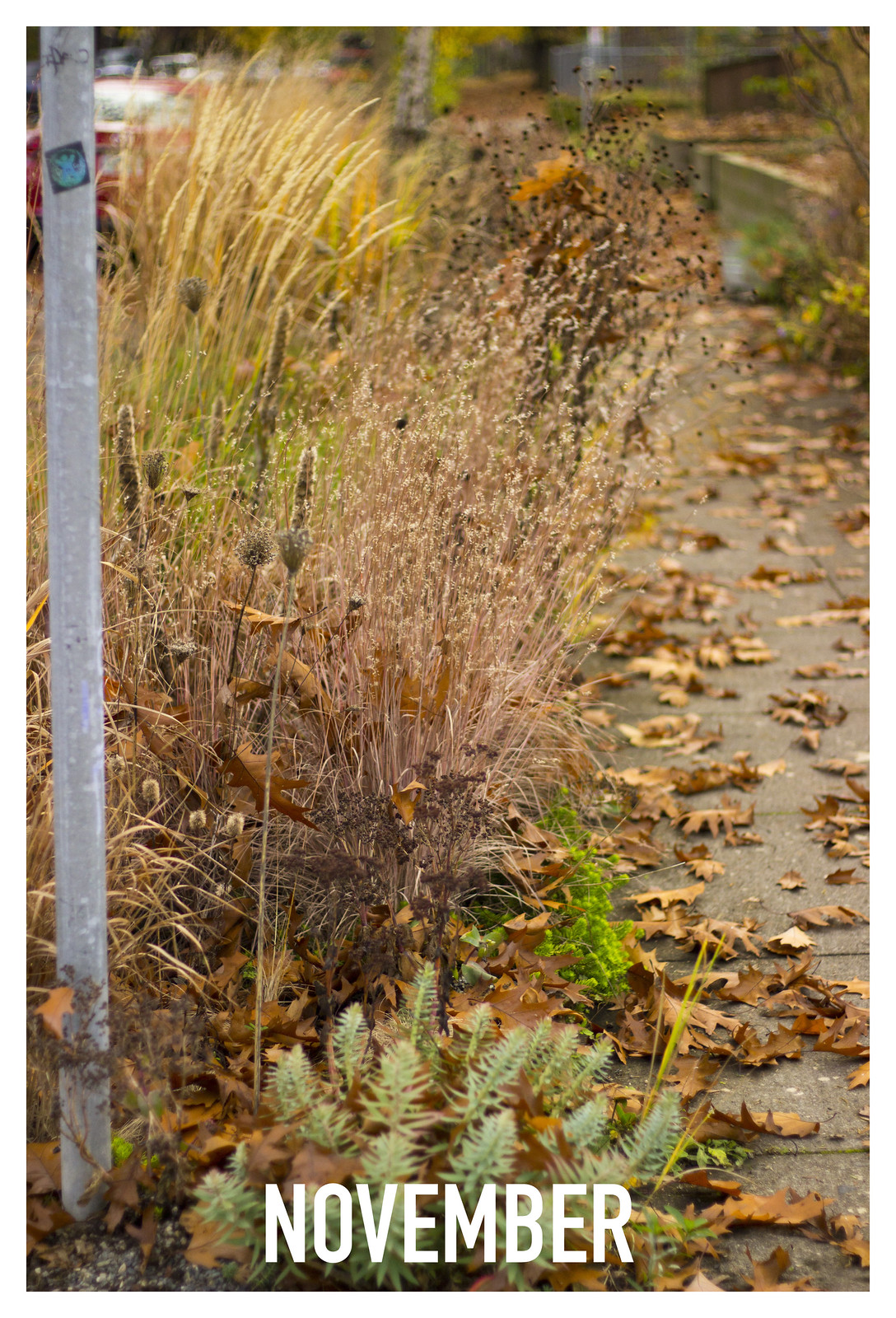 As November approached this year, as in most years, I gradually start to settle in for the season. With the promise of Winter, I can unhook the garden hoses and just wander around the garden, not feeling any pressure to actually DO anything for once! 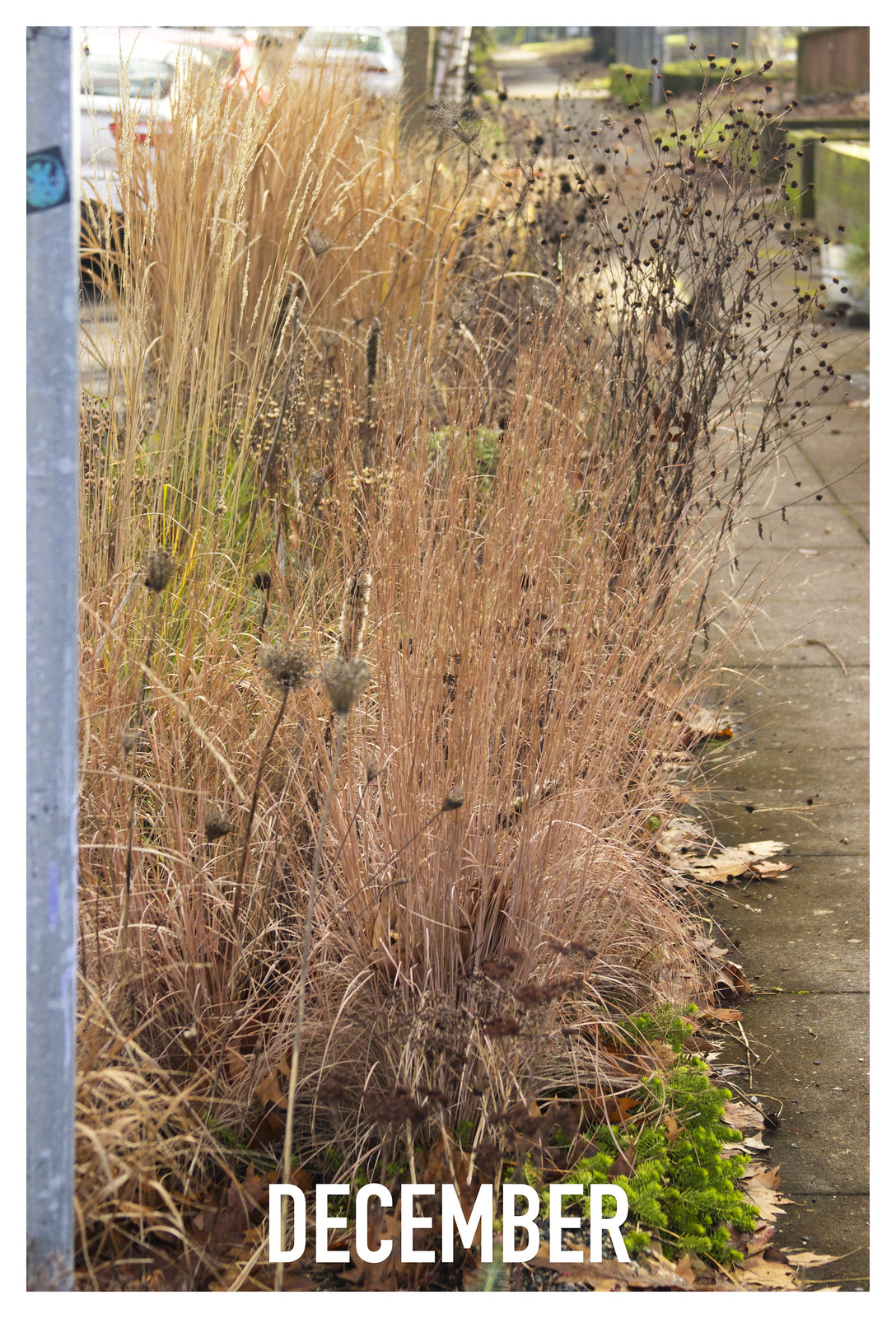 And here we are in December...we've actually had a fair bit of winter weather so far (snow and ice...oh my!) and it looks like we may even get a bit more in the coming weeks...although I try not to get too excited for it, in case it doesn't materialize. As I look outside this morning, I'm struck by how much the garden has changed, not just this year, but over the 7-ish years we've been here. My mind wanders to the changes I have in mind for next year (nothing major...but changes, all the same). I hope you had a good 2016 in your garden...and here's to 2017...hopefully it will be a banner year for us all :-)
Posted by scottweberpdx at 7:06 AM No comments: 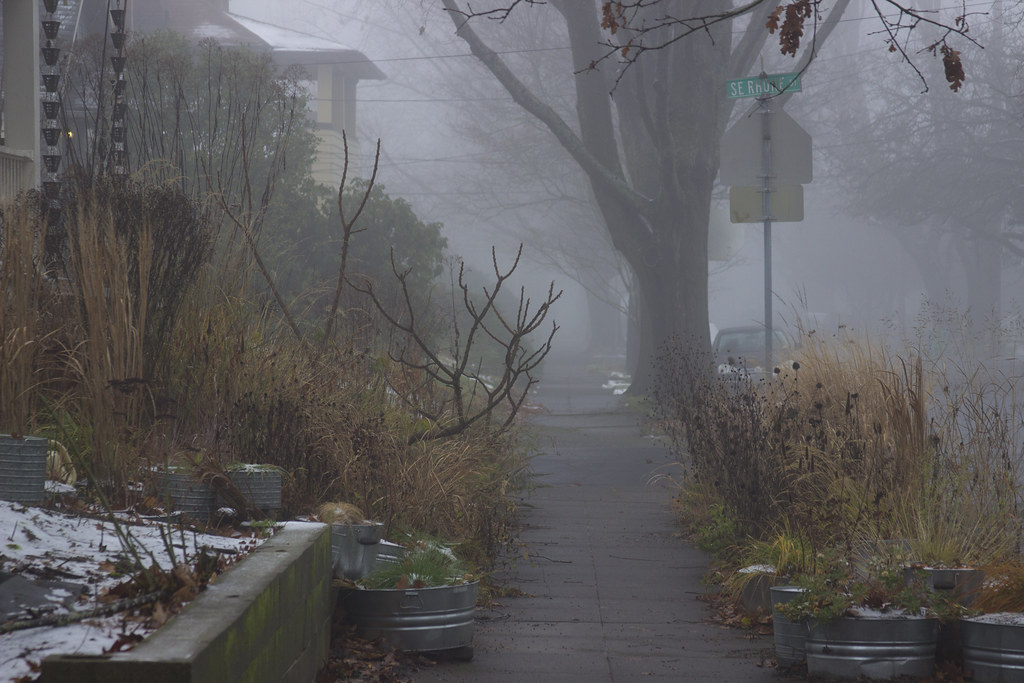 Posted by scottweberpdx at 10:27 AM No comments: