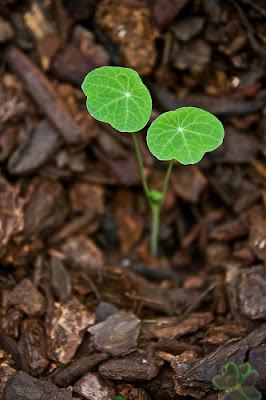 But i decided to fill in some of the gaps with some nasturtiums. I had originally intended to have them fulfilling this role earlier in the summer, especially since I didn't get a chance to work on the garden until almost the 4th of July. Sadly, the brave nasturtiums I planted at that time were fried to a crisp in the following few weeks, when temps got up to 107°...a rarity in Portland, and not one I'd like to see repeated. So, here they are, a month later now that the temps are a bit more temperate (80's during the day, 60's at night). Let's cross our fingers that they JUST start to bloom by the time frost hits ;-)

As a side note...I also didn't realize until after I planted this batch that it wasn't the long, trailing kind I usually get to weave around plants (Fordhook Mix, I think) but a smaller, compact version called Jewel Mixed Colors, max height and spread...1 foot...sheesh!
Posted by scottweberpdx at 7:02 AM